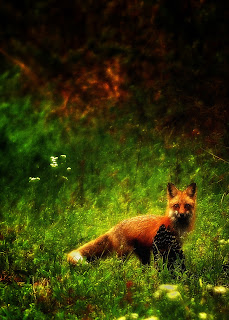 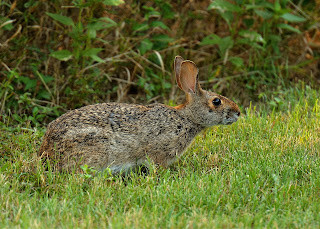 Pondering predator-prey relationships in the ecosystem is an interesting pastime.  Animals in both categories are well adapted to survive in their environment.  Survival often becomes a game of wits.  Consider the swamp rabbit (Sylvilagus aquaticus) and the red fox (Vulpes fulva).  Each has a bag of tricks that will help it survive.
The swamp rabbit, a common denizen of bottomland hardwood forests in Louisiana, has traits that have evolved to help it evade one of its main adversaries, the red fox.  Swamp rabbits are well camouflaged.  Their streaked black and brown fur blends into the surrounding vegetation.  They have long, mobile ears that can detect the slightest noise.  They have eyes on the sides of the head as do many other prey species, which gives them good lateral perception of movement.  They also have a keen sense of smell and are wary, a trait vital to their survival.  The first trick they use to prevent detection is to crouch and freeze.  If discovered, they escape by running in a zig-zag manner that can be hard for a predator to follow.
The red fox also has a bag of tricks for survival.  He has an acute sense of smell.  Red foxes probably detect swamp rabbits by smell before they see them.  Their ears are large and upright  and can also sense the least noise.  The red fox is a swift runner and has eyes on the front of its head that provide good depth perception.  He runs in a straight line to chase prey.
So in this game of wits, who wins?  Both species must win some of the time if they are to survive.  Swamp rabbits have one trick that other kinds of rabbits don't have.  They don't mind swimming.  So if the red fox is hot on his trail, he heads for the nearest body of water and dives in.  He waits then with his nose poking out of the water until the fox leaves.  Red foxes aren't fond of water and may forfeit the hunt.  If this happens, the swamp rabbit has outfoxed the fox.  But if this doesn't work, then the rabbit may just plead "please, please don't throw me in the briar patch."
Note:  I wrote this essay for the public radio program called "Bayou Diversity" that my husband, Kelby, records each week on KEDM 90.3 F.M. The program airs at 9 a.m. on Monday and 1 p.m. on Thursday or you can listen to it at the listening room www.kedm.org.
Also, check out his website:  www.bayou-diversity.com
The photos are by Burg Ransom and are from my book:  Swamper, Letters from a Louisiana Swamp Rabbit.
Posted by AmyOuchley at 7:53 AM