A Visitor with Marvelous Adaptations

Yesterday an interesting creature came to visit.  The Eastern Mole (Scalopus aquaticus) showed up on our doorstep, because a nosey dog had extracted him from his tunnel.  Fortunately, the mole was wet, but not injured.

A good reference is George Lowery, Jr.'s book, The Mammals of Louisiana and its Adjacent Waters, so the next step after examination was to read about the mole.  "Moles are among the most highly specialized of all terrestrial mammals,"  writes Lowery.  "They are indeed a marvelous bundle of adaptations to their particular way of life, which involves spending probably 99 percent of their time in their subterranean passages."

The mole's front legs and feet look like good digging tools.  The legs are short; the big feet turn outward and possess five spade-like claws.  The mole's head is unique.  The delicate nose protrudes like a pink probe, there are no external ears, and no eyes are apparent..  According to Lowery, natural selection has reduced the ears and the eyes to tiny openings.  Also, the tail is a short, bare stub.  The moles doesn't need ears, eyes, or a tail underground.

Many books describe mole fur as soft as velvet, which is perfect.  Their soft, velvety fur allows the mole to go forward or backward with ease in his tunnel.

I have found mole skulls in owl pellets during my years as an environmental educator, but had not encountered a live mole since my college days.  After looking and photographing the unusual animal, I released him and he disappeared into a brush pile to get back to his work IN the earth's ecosystem.
Posted by AmyOuchley at 8:38 AM No comments:

Three unique terms are:  moss, liverwort, hornwort.  The bryophytes are a primitive group of plants that are small in size, but large in greenness and beauty.  All three live in moist areas and lack vascular systems or tubes to carry fluids.  Thus they stay little and close to their water.

I learned something about identifying mosses on a fieldtrip at the 2011 Spring Wildflower Pilgrimage in Great Smoky Mountains National Park.  It seemed an overwhelming task to learn a few of the 450 moss species found there.  Mostly I enjoyed wandering around with the bryologists looking at some of their characteristics with my 10X hand lens.  One interesting fact I noted involved the huge, rotting logs covered with moss called "nursery logs".  The mossy carpet on the log has the ecological value of trapping moisture and holding the log together as it decomposes.  The log becomes a fertile substrate for germinating maple and hemlock trees and gets the name "nursery log".  Here was another great example of nature's economy.

I have never seen a hornwort in Louisiana, so I asked my botanist friend Dennis Bell if they grew here.  "Yes," he said, "being so small, they are easily overlooked."  He's found them on wet ground in late March or early April next to his church.

In the winter green blankets of moss catch my eye and stir my imagination.  Mounds of mossy earth glow in the bare winter woods along the creeks.  Down in the swamp the liverworts get thick and fleshy after a rain giving the tree branches a rich, green luster.  I find moss in the most unexpected places like in the cracks of a sidewalk or beside an asphalt road.  I will keep my hand lens with me and let you know when I get to see a hornwort.
Posted by AmyOuchley at 1:44 PM No comments:


It's all connected.
Posted by AmyOuchley at 6:50 PM No comments:


Moss-footed oaks stand silently as the icy rain falls in the forest.  As the ice accumulates on each twig  and branch, the world becomes crystalized and enchanted.  Since it was 70 degrees F. on Saturday, a mayhaw (Cretaegus  opaca) down in the swamp decided to bloom.  Today in 32 degrees F. it has changed its mind.  The fickle Louisiana weather confuses everything.  In the leaf litter under the leafless oak canopy the crane-fly orchid's (Tipularia discolor) green leaves attempt to photosynthesize since the sunlight can reach them on the forest floor.  This plant will store food when the sun shines again to prepare for its spire of tiny orchids that bloom in late summer.  The leaves disappear at that time.  Nature's ways are fascinating if only one stops to look and ponder them.
Posted by AmyOuchley at 12:12 PM 2 comments:

Phenology is the study of natural phenomena that recur periodically.  It is observing and knowing what and when things are happening outside.  This morning in January the chorus frogs were calling and they usually do call on warm, wet days and nights in mid-winter in north Louisiana.  Their name is excellent, because many frogs call at one time in "chorus."  The frog, who starts the chorus, is called a "bout leader."  The call of chorus frogs sounds like "pulling a thumb down the teeth of a plastic comb."
Go outside tonight and listen.  You may hear the call of the chorus frogs.
Posted by AmyOuchley at 9:43 AM No comments:

What to do on a cold, wet, winter day?  Read.  The book of the day is "MOONBIRD, A Year on the Wind with The Great Survivor B95" by Phillip Hoose.  Here is how Hoose starts this fascinating read:  "Meet B95, one of the world's premier athletes.  Weighing a mere four ounces, he's flown more than 325,000 miles in his life - the distance to the moon and nearly halfway back.  But changes throughout his migratory circuit are challenging this Superbird and threatening to wipe out his entire subspecies of rufa red knot."

This book makes me want to go look at shorebirds and do all that I can to save habitat for them.  B95 does not normally come to Louisiana on his migration route, but we have many shorebirds and other birds that rely on habitat here during the year.

I recommend this book.  Check it out from your library.
Posted by AmyOuchley at 9:06 AM No comments: 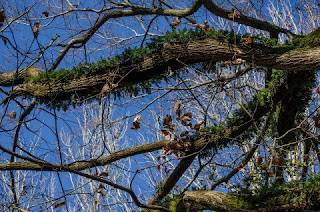 Resurrection fern (Polypodium polypodiodes) is a good example of adaptation in plants.  The fronds curl up in dry weather and look dead, but they uncurl in wet weather and turn dark green to photosynthesize.  Resurrection fern resurrects.  It grows all over Louisiana on the rough bark of trees like oaks.  It especially likes live oaks.  It is an epiphyte or "air" plant and does not harm the tree.  Find a fallen bough and peel off some of the bark with the fern on it.  Put it in a container.  Let the fern dry out, then spray water on it and watch it resurrect.
Photo of resurrection fern by Tammy Slocum
Posted by AmyOuchley at 5:24 PM No comments:

Are you interested in becoming a more intimate friend with the natural world?  It's easy.  Just become a noticer and look at nature out the window or when you go for a walk.  What is happening out there?  What birds are visiting your feeder today?  What does the resurrection fern look like?  Is it bright green or shriveled?  Look closely at the buds on plants.  They are changing right now. So much is there to see. Nature waits for you.
Posted by AmyOuchley at 8:21 AM No comments: